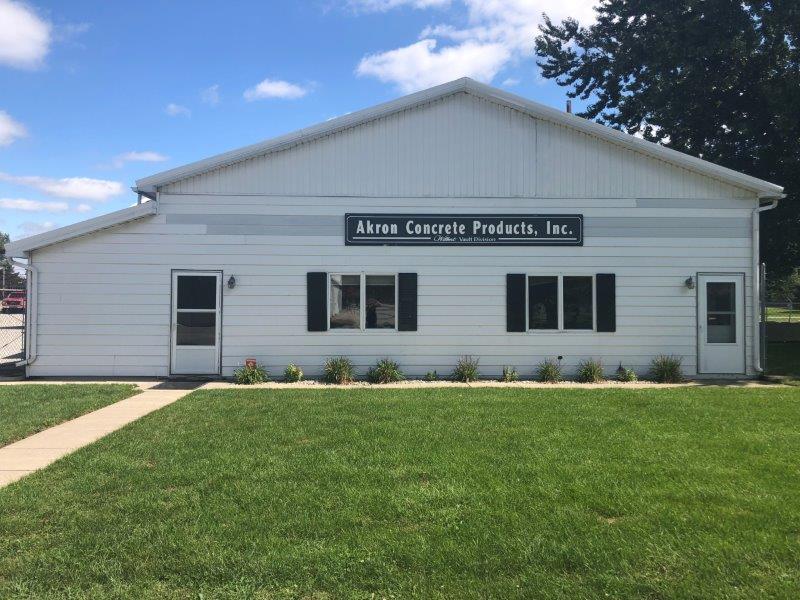 Akron Concrete Products is a fourth-generation, family-owned business that specializes in providing quality funeral products and services to funeral professionals and the families they serve. Additionally, ACP manufactures and installs a number of precast concrete products. Please contact us to learn more about our offerings.
Read more

Fred Walgamuth founded Akron Concrete Products, Inc. in 1928 after managing Doswell & Kover’s Toledo, OH burial vault plant for three years. He was fortunate to find a piece of land that seemed perfect for his dream business; 321 North Maple Street is still home to the business today.

In addition to burial vaults, Fred also marketed a number of pre-cast concrete products which Akron Concrete Products still offers including parking bumpers, stepping stones, and flower pots.  From 1928 until 1958 Fred operated the company with the help of just one other employee. Then, in 1958, after graduating high school, his son Terry joined the family business. While Fred founded the company, it was Terry who truly helped Akron Concrete Products grow.

In 1970, Fred and Terry made the short drive to Chicago to inquire about purchasing a Wilbert franchise. Much to their delight, they were successful; and so the company continued to expand.  Additionally, throughout the 1970s and early 1980s, Fred and Terry purchased a number of small burial vault companies including those located in Bremen, Plymouth, Warsaw, and Bourbon.

In 1980, Terry’s son Pat became the third generation to join Akron Concrete Products.  Then in1982, Terry’s son-in-law Jeff Murphy joined the company to work in sales, and his daughter Terri Lynne Johnson became the Office Manager in 1983.  Shortly thereafter Fred decided to retire and handed the ropes over to Terry. In 1984, Terry had the foresight to notice the growing demand for cremation services and built Hoosier Crematory on Akron Concrete Products grounds.  After working at the plant for thirty years, Terry decided to slow down and semi-retired in 1989.  Naturally, he sold the company to Pat, Jeff, and Terri Lynne. Always a hard worker, Terry was never quite satisfied leaving the company altogether; therefore, he maintained a vested interest in the company’s affairs until his unfortunate death in 2006. He even served as president of the Wilbert Manufacturer’s Association from 1990 to 1991.

Under Pat’s, Jeff’s, and Terri Lynne’s leadership in the early 1990s, Akron Concrete Products acquired two new burial vault companies located in Mishawaka and Fulton. With the purchase of the Mishawaka burial vault plant also came a second crematory, which now accounts for approximately half of all cremation sales. Then, in the late 1990s, Pat, Jeff, and Terri Lynne decided to expand the pre-cast concrete component of their business by introducing containment vessels to their line and acquiring a Bilco® license to sell second entries and window well systems for homes.  In a surprising turn of events, Terri Lynne and Jeff opted to sell their stake in the company to Pat in the fall of the 2001. Under Pat’s guidance, the company has continued to diversify and grow.  In early 2008 Pat purchased a grave digging company from Bill and Laura Eber.  Akron Concrete Products now digs graves at nearly fifty cemeteries in northern Indiana. Also in 2008, Pat developed a new pre-cast concrete item – the storm shelter to protect those who don’t have basements against Indiana’s volatile weather. Today, Akron Concrete Products markets its pre-cast concrete all over northern Indiana and serves funeral directors in ten counties in northern Indiana, as well as Cass County in southern Michigan.

Contact us to learn more about Wilbert Funeral Services or to request a schedule of the upcoming continuing education classes for funeral professionals.

Wilbert offers two types of burial set-ups, Wilbert Way (WW) and Above Ground with Lowering Device (AL). Both set-ups consist of an above ground seal and a lowering device, also known as The Wilbert Way Lowering Device. The difference in the two setups is in the placement of the vault and the vault cover during the funeral service.

One 15x20 tent is set by Akron Concrete Products at the gravesite for funeral services.  The tent covers the burial area and provides a comfortable place for families to gather during the funeral.  In addition, 12 chairs with covers will be neatly arranged under the tents.  At the end of the funeral, the family tent is removed.  Akron Concrete Products manages the delivery, setup, and removal of the grass and chairs.

Wilbert Burial Vault provides grave digging & disinterment services. Wilbert is fully equipped with "track hoe" tractors which significantly reduce the amount of time needed to prepare a grave. The grave digging service includes the opening and closing of the grave. If it becomes necessary to move a vault from one location to another, Wilbert can assist with these services. We handle everything from locating the vault to relocating the vault to a new location.

When a hero falls, Wilbert is there.

Our “Commemorating First Responders” program provides families of firefighters, law enforcement officers and emergency medical personnel who have died in the line of duty with a tribute worthy of their valor and sacrifice.

At no charge to the family, Wilbert and our licensees donate a customized Wilbert Stainless Steel Triune® burial vault. If the choice is cremation, we offer a selection of four urns, as well as a Stainless Steel Triune urn vault for memorial tribute. If permitted, a WilbertWay® graveside service may also be included.

Join us as we help families honor heroic lives, sacrificed in valiant service to neighbor and community.

Wilbert Funeral Service in Chicago (corporate HQ) has awarded Akron Concrete Products with "Ultimate Service Provider" for the tenth year in a row.